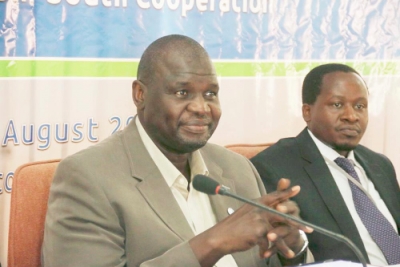 “The demand for rice is growing at more than six per cent a year – faster than any other major food staple in sub-Saharan Africa – but the local production has been unable to keep pace with the demand, and the continent continues to rely on imports to meet its increasing demand for rice,” he stated.

At the opening of a five-day workshop in Elmina on knowledge exchange for the promotion of efficient rice farming practices and value chains in sub-Saharan Africa through South-South Cooperation,

Mr Tijani highlighted the rice value chain as a major example of the agricultural potential for income and employment generation and a critical entry point for poverty reduction.

“There has been a sharp rise in rice production in Africa in recent years, but producers in the region continue to contend with the lack of adequate and sufficient planting materials, tools, machinery for land preparation, harvesting, processing and prevention of post-harvest losses,” he added.

The Programmes Leader, Rice Sector Development (AfricaRice), Mr Josey Kamanda, noted that rice was a strategic and priority food security crop in Africa; the single most important source of dietary energy in West Africa and Madagascar and the third most important staple for Africa as a whole.

“As the demand-supply gap continues to widen, there is an increasing need for investments that will significantly increase local rice production to reduce the import bill. Over the past several decades, development partners have made investments in rice production. Yield gaps, however, remain high,” he stated.

Growth rates went up to a high eight per cent between 2007 and 2012, but there were significant post-harvest losses of between 15 per cent and 25 per cent, AfricaRice estimates.

Top rice producing countries in Africa, namely Nigeria, Madagascar, Guinea, Côte d’Ivoire and Tanzania have boosted their rice production through the introduction of high-yielding technologies and the application of modern rice cultivation techniques, including mechanisation.

The FAO is actively supporting AfricaRice to establish rice centres of excellence such as the Africa Korea Rice breeding laboratory launched this month in Saint-Louis, Senegal.

Also, under a $5-million regional project on Partnership for Sustainable Rice Systems Development in sub-Saharan Africa, FAO will support the sharing of technologies and innovations among beneficiary countries,  strengthen capacity building, while facilitating access by smallholders, especially women and young people, to inputs and small-scale agricultural equipment.

The cooperation between FAO and AfricaRice offers a pathway out of poverty and employment opportunities for young men and women entering job markets in line with the Sustainable Development Goals (SDGs).