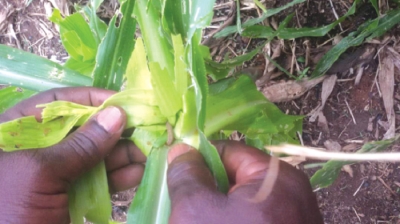 Farmers in parts of the Ashanti and the Brong Ahafo regions have expressed worry about the increasing devastation of their farms by fall army worms.

They said the worms had destroyed greater portions of their farms (mainly maize), which had affected their yields.

The farmers blamed the late arrival of chemicals and the insufficiency of chemicals for the spraying of farms as the main cause of the continued presence of, and destruction by the worms.

The areas most affected are the Ejura-Sekyedumase municipality in the Ashanti Region and the Nkoranza and the Kintampo districts in the Brong Ahafo Region.

The farmers expressed the concern during fact-finding visits by the members of the Parliamentary Committee on Food, Agriculture and Cocoa Affairs last Thursday and Friday.

Members of the committee were on the trip to assess the implementation of the Planting for Food and Jobs Programme and the management of the fall army worm invasion.

The Minister of Food and Agriculture, Dr Owusu Afriyie Akoto, had told Parliament recently that the worms had been defeated, but the claim was disputed by some farmer groups.

Meanwhile, farms in the Mampong and the Sekyere Central districts have recorded high recovery rates of close to 90 per cent following the supply and the spraying of the chemicals.

One of the farmers in the Ejura-Sekyedumase municipality, Mr Bawa Fumakoseheye, said his 50-acre farm was cultivated with a bank loan and lamented that due to the delay in the arrival of chemicals and their inadequacy, 40 acres of the farm had been destroyed by the worms.

He said he did not know how to raise money to plant new crops and indicated that currently there was no chemical to spray the farms.

Another farmer at Nkoranza, Mr Kojo Asare, blamed the late arrival of the chemicals for the devastation of their farms.

He said the chemicals were kept in the district capitals and by the time they received them, it was too late.

Mr Asare said he and his colleague farmers were compelled, under the circumstance, to buy their own chemicals from the open market.

Another challenge that the farmers complained about was the fee charged for the spraying of farms.

The directors of agriculture in the various districts explained that they received some quantities of chemicals but they were not sufficient to spray all the farms.

The Brong Ahafo Regional Plant Protection Officer, Mr Godson Tettey, said the spraying was supposed to be done three to four times to be able to completely kill the fall army worms.

However, he said, the region was able to supply chemicals to farmers for the first phase of the spraying exercise.

As a result, he said, most of the farms had been sprayed once, while a few farmers had been able to procure some of the chemicals to spray their farms the second time.

He said the difficulty was that the fall army worms had laid eggs on the plants which could hatch and destroy the farms if the farms did not receive additional treatment.

For instance, the Kintampo North Municipal Director of Agriculture, Mr M.K. Ahiadzi, said farmers with about 60 acres of farms were given chemicals to cater for only 10 acres.

He said the farmers were, therefore, required to purchase the rest of the chemicals from the open market.

The Chairman of the Parliamentary Committee on Food, Agriculture and Cocoa Affairs, Mr Kwame Asafu-Adjei, lauded the government and agricultural officers for the intervention which had achieved high recovery rates in some areas.

He urged the government to procure more chemicals to increase supplies to farmers to ensure the eradication of the worms.

He expressed the hope that in spite of the army worm invasion, the country would witness a bumper harvest this year.

The Ranking Member of the committee, Mr Eric Opoku, expressed worry about the continued devastation of farms by the worms and urged the government to increase the supply of chemicals to affected farmers.