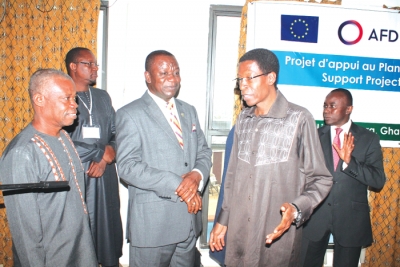 Agricultural experts from eight ECOWAS countries are meeting in Accra to develop an action plan to deal with flies that negatively impact on the production of fruits in the sub-region.

The workshop, which is a follow up of the 2016/2017 action plan, is in recognition of the negative impact of fruit flies on the production and export of fresh fruits and vegetables, particularly mangoes, to European and American markets.

The member countries have established national fruit fly management committees to address the repeated quarantine of fly-infested fresh fruits from African countries to the European and other international borders and airports.

In order to achieve an acceptable level of protection against the impact of the fruit fly menace on the mango industry, ECOWAS has approved a support project to the regional plan for monitoring and controlling the economically important fruit fly species in West Africa.

In a speech read on his behalf at the opening of the workshop, the Minister of Food and Agriculture, Dr Owusu Afriyie Akoto, noted that fruit flies are a threat to horticultural production in the ECOWAS sub-region.

“Major traditional export crops such as fresh mangoes have been intercepted in countries where these fruit flies do not occur,” he said.

Dr Akoto indicated that the major challenges facing the ECOWAS sub-region in combating the fruit fly menace in the horticultural production industry were related to surveillance, capacity building of all actors along the mango value chain and monitoring and evaluation of control modules that were efficient and effective.

The Chairman of the National Fruit Fly Committee (NFFC) of Ghana, Professor Kwame Afreh-Nuamah, noted that horticultural crop production was one of the fast-growing agricultural sectors in Africa, providing food, income and employment.

He said in the last three decades, the fruit industry in Ghana had developed through the export of assorted fresh and processed tropical fruits to Europe and added that the industry’s export to the EU generated approximately €562 million to the national economy.

Prof. Afreh-Nuamah said mango was marked as the next ‘big’ crop to replace cocoa and it fetched the highest foreign exchange for the country until the emergence of the fruit fly problem.

“Unfortunately, the study did not include an estimated budget, a breakdown of activities between the regional and national levels or an institutional implementation mechanism. To remedy these shortcomings, the World Bank, using funds available in an EU trust fund, the World Trade Organisation (WTO)-based standards and Trade Development Facility co-financed a complementary study, which addressed these issues and proposed a more comprehensive and budgeted regional action plan to all ECOWAS member countries,” Prof. Afreh-Nuamah said.

He said a country needed to establish a national fruit fly management committee to be responsible for coordinating the implementation of the programme’s national aspects in each country.

In anticipation of Ghana being a beneficiary of the project, he said, “we impressed on our government the need for such a committee and on June 1, 2010, Ghana’s National Committee was established with a promised financial support of $1.5 million.”

“Because we had already established our committee, Ghana was warmly accepted into the membership of the project and participated in its launching and opening ceremony in Darkar, Senegal, in October 2014,” he announced.

Prof. Afreh-Nuamah said since then, “we have been slowly warming up” to activities outlined in the project implementation, adding, “while we wish we could run, we have been held back a little so as not to outrun the other countries.”