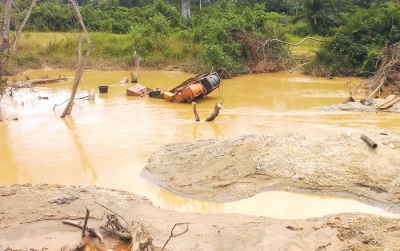 The Chief Executive of the Ghana Cocoa Board, Joseph Boahen Aidoo, has lauded the Media Coalition Against Illegal Mining (galamsey), describing it as a timely intervention that will help curb the "alarming incursion" of cocoa farms by illegal miners.

Although the coalition is still in its hay days, Mr Aidoo said He was confident that the action will help save cocoa farms of the impunity that illegal mining, infamously called galamsey, poses to the country's cocoa economy.

He gave the commendation in Accra in a interaction with media professionals on Tuesday evening.

On the cocoa industry, Mr Aidoo, a former Western Regional Minister, said he assumed office at a time things were "too difficult" for the industry hence the extra commitment from him and the management to help address them.

He mentioned the steep decline in cocoa prices and reduction in output as some of the challenges the board was working to address.

Cocoa prices have been on the decline, printing fears that the government could miss its revenue target from the crop.

This year, the government is aiming at grossing some Ghc3.9 billion from the industry, which employs about 17 per cent of national labour force.

Mr Aidoo also defended the government's decision to subsidise fertilizer for farmers, explaining that the free distribution made it easier for the product to be smuggled to neighbouring countries.

"Recently, I was in Cote d'Ivoire and I was told that their farmers use Ghana fertilizer," he said, adding that fertilizer from Ghana is smuggled to as far as Cameron, where cocoa production is comparably minimal.