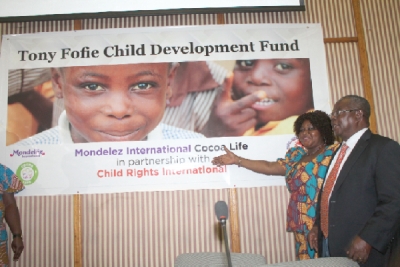 A skills and capacity building programme for young people in cocoa-growing communities in the country has been launched in Accra.

The programme is aimed at equipping beneficiary youth with livelihood skills and reducing the incidence of students dropping out of school and child labour in cocoa growing areas.

Under the initiative, 70 young men and women from the beneficiary communities will be supported to pursue senior high school (SHS) education, apprenticeship and technical and vocational education.

The initiative is by Mondelez International Cocoa Life (MICL), a mother company of Cadbury Ghana Limited (CGL), with support from stakeholders in the cocoa industry.

Beneficiaries of the fund will also receive career guidance through a mentorship programme.
The programme is being implemented by Child Rights International (CRI), a non-profit organisation committed to the protection and promotion of the inherent dignity of children.

The Country Lead of MICL, Mrs Yaa Peprah Amekudzi, said education “is an integral part of a nation’s development”, and added that the fund would be used to address child protection issues and livelihood challenges of cocoa farmers in educating their children and wards.

“Our objective is to support farmers to improve their yields and livelihood and earn incomes that will lift them out of poverty,” she stated.

Mrs Amekudzi said the company would also work towards eliminating child labour by helping communities tackle the root causes of such practices, including nurturing the next generation of cocoa farmers and protecting landscapes to maintain eco-systems in order to provide viable environments and farmlands for future generations.

In a speech read on his behalf, the Minister of Education, Dr Matthew Opoku Prempeh, said over the years, various governments had made efforts at building schools and providing teachers in rural communities with basic necessities to ensure that every child had the right to education.

“We believe that education is a great social mobility tool with the capacity to lift our people out of poverty and deprivation,” he stated.

Dr Opoku Prempeh further gave an assurance that the free SHS policy by the government would be implemented in September this year.

He commended the efforts by the MICL in addressing the socio-economic problems that affect the sector.

He, therefore, called on stakeholders to come together to ensure that the objective of the programme was achieved.

“National development is more sustainable when the government, citizenry and corporate institutions work together,” he added.

He advised the beneficiaries to take advantage of the opportunity to safeguard their future.

Mr Fofie underscored the need to assist individuals, particularly farmers, who toiled daily to provide cocoa and other raw materials for the growth of the sector and also generate revenue for the country’s development.

He said child labour continued to be a setback in the development of the cocoa sector in most producing countries, as half of the population of children in the cocoa-growing areas were not in school.

Mr Fofie stated that recent cases of ‘galamsey’ activities, with the resultant loss of lives, reduction in cocoa tree populations, use of children in gold prospecting and destruction of land and water bodies, were a blot on the conscience of the nation.

“It must be recognised that reducing or eradicating child labour goes in tandem with strengthening child protection systems to ensure that children are re-integrated into society and freed from any form of exploitation or abuse,” he said.

The Executive Director of CRI, Mr Bright Appiah, gave an assurance that the organisation would remain steadfast in promoting the fundamental human rights of children, particularly the needy, to acquire education.