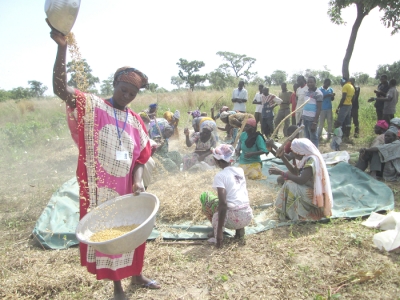 The Agricultural Development and Value Chain Enhancement (ADVANCE) project, aimed at increasing the competitiveness of the maize, rice and soya (MRS) value chains in Ghana, has in the last three years - October 2014 to January 2017- reached 107,533 smallholder farmers.

ADVANCE, a five-year project under the United States Government’s Global Hunger and Food Security Initiative, ‘Feed the Future,’ is being funded with US$37,000,000.

In the area of good agricultural practices, numeracy, how to earn more for crops, farming as a business and female leadership, 90,013 individuals have been trained, out of which 44,594 are women.

ADVANCE has a goal to increase competitiveness in the MRS value chains through increased productivity in targeted commodities, increased market access and trade and strengthened local capacity.

It adopts a value chain approach where smallholder farmers are linked to markets, finance, inputs, equipment and information through nucleus (commercial) farmers and traders who have the capacity to invest in these chains.

The project also builds the capacity of both the commercial and smallholder farmers and farmer-based organisations to increase the scale and efficiency of their farm business with improved production and post-harvest handling practices, including using improved seed varieties and other inputs, mechanisation services, training in good agronomic practices, and facilitating market access.

ADVANCE has facilitated the disbursement of US$3,618,909 in cash loans to beneficiaries. It has also enabled 62,430 individuals to apply technologies and practices on 58,592 hectares of land.

Over US$950,000 worth of inputs were invested by out-grower businesses into both their farms and their out-grower farms at the beginning of 2016 and 600 contracts between buyers and out-grower business (estimated to cover at least 92,000 metric tons of MRS valued at over US$4.4 million) were facilitated. —GB