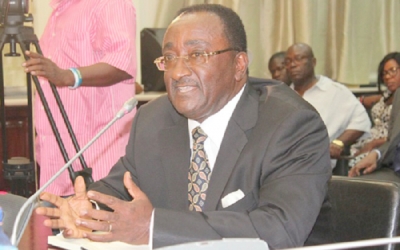 The Minister of Food and Agriculture, Dr Owusu Afriyie Akoto, has said increased consumption of locally processed cocoa can inure to the benefit of cocoa processing companies in the country.

He said increased consumption would present an opportunity for industrialisation in the cocoa sector and the by-products from the processing would also be useful along the value chain.

At the opening of the second meeting of the Ghana-Cote d’Ivoire Technical Co-operation on Cocoa in Accra, the minister said expanding the downstream sector and increasing consumption of cocoa domestically were among the urgent steps that would ensure the market equilibrium required to achieve remunerative producer price.

“Increasing domestic consumption will spur increased cocoa processing locally, not forgetting the use of the by-products. This presents an opportunity to industrialise and diversify the economies of our commodity-dependent economies, create job opportunities, alleviate poverty and generate revenues for social and economic development,” he stated.

The aim of the country, he said, should be a gradual move to the end of the value chain, which would include the production of confectionaries in order to realise the maximum gains and the other related benefits that this process would bring about.

The minister also noted that in both Ghana and Cote d’Ivoire, cocoa production had almost reached its frontier land areas. Intensification of cocoa production was, therefore, necessary and would require the efficient delivery of cost-effective inputs and other farm services to farmers, he added.

“Cocoa production must adapt to climate change, using best known climate-smart agriculture practices. Our aim in this regard should be to build a resilient and robust cocoa sector that increases the economic opportunities for our farmers without compromising the integrity of our environment,” he said.

The Chief Executive Officer of the Ghana Cocoa Board, Mr Joseph Boahen Aidoo, said the total liberalisation of the cocoa sector in West Africa had exposed the market to a number of harsh effects instead of the expectation that it would enhance trade efficiency.

“World cocoa prices have continued to fluctuate, thereby exposing farmers to uncertainties surrounding agricultural commodity production. Cocoa farmers, who are always at the receiving end of shocks of world prices have, therefore, been the worst affected,” he noted.

The two-day meeting organised under the auspices of the Ghana Cocoa Board brought together officials from Ghana and Cote d’Ivoire to devise strategies for mitigating the harsh effects of declining prices on cocoa farmers.

Dr Akoto also reiterated government’s commitment to the Ghana-Cote d’Ivoire Technical Co-operation for sustainable cocoa economy and said the country would contribute all that was necessary for the co-operation to inure to the mutual benefit of the two countries.