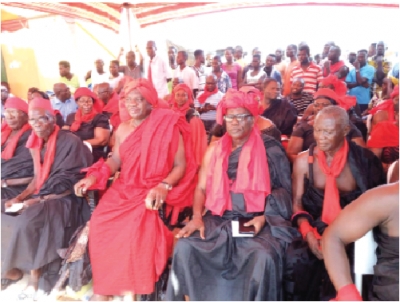 The traditional authorities in Edina (Elmina) in the Central Region yesterday invoked the gods of the area to punish recalcitrant fishermen who continued to use dangerous chemicals to fish in the area.

Before invoking the powers of the 77 gods, Nana Kodwo Conduah VI, the Paramount Chief of the Edina Traditional Area, led the people, including some fishermen, to march through some of the streets of Elmina to demonstrate their disapproval of the illegal methods being used by some fishermen.

The protesters, clad in black and red apparel, later converged on a fish landing site near the Oman Shrine, where they were addressed by the Paramount Chief.

While pouring libation to invoke curses on the recalcitrant fishermen, Nana Conduah asked the gods of Eyeaba to deal with fishermen who used DDT, dynamite, a mixture of Omo and gari, formalin and chemicals on their fishing expeditions.

The ceremony was organised by the Central and Western Fishmongers Improvement Association (CEWEFIA), in collaboration with the Edina Traditional Council.

The CEWEFIA is a partner in a sustainable fisheries management project (SFMP) being spearheaded by the United States Agency for International Development (USAID).

The project seeks to rebuild targeted marine fisheries stocks through the adoption of sustainable practices.

The event was also meant to launch a community action plan (CAP) on rebuilding Ghana’s marine fisheries and reducing child labour and trafficking in the sector.

Speaking at the durbar, Nana Conduah said there were reports that some fishermen were using unauthorised fishing methods which, he said, posed a threat to marine life and consumers.

He warned that, the traditional council would not tolerate illegal fishing practices in the area, since they affected survival, health and livelihoods in many communities.

The Chief Advisor to the SFMP, Mr Kofi Agbogah, observed that the increasing number of canoes and trawlers in the area could result in a very fast rate of reduction in fish stock.

He described the action of the traditional authorities as commendable.

The Executive Director of CEWEFIA, Mrs Victoria Churchill Koomson, stated that CEWEFIA would continue its education on activities such as child labour and trafficking in fishing communities in the area.

Some of the fishermen, however, showed little interest in the action by the traditional authorities, as most of them were seen either busily mending their nets or selling their fish.

One of such fishermen, Mr Kwame Mensah, told the Daily Graphic that invoking the gods was not a solution to the challenges in the industry.

He rather entreated the chief and his elders to turn their attention to foreign fishing vessels which were operating in the area.

According to him, fishermen spent GH¢500 on fuel daily but most of the time returned home empty-handed as a result of the “competition we have from foreign vessels”.