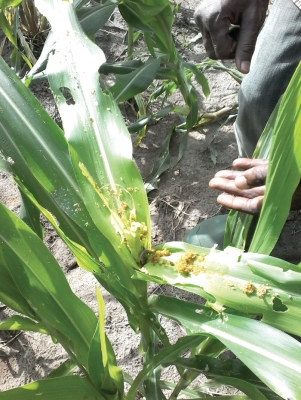 Maize yield is likely to reduce in the Volta Region this year due to the invasion of army worms on farms in the area.

Some of the affected farmers say their situation had been worsened by the fact that they had to use their own resources to deal with the invasion without any support from the Ministry of Food and Agriculture (MoFA).

During a visit to some affected farms at Abuatia-Kota in the Ho West District by the Daily Graphic, the farmers expressed concern that their investments, including the outright purchase or long lease of land and the application of chemicals, fertilisers and preparation of land including ploughing would all go waste.

One of the affected farmers, Mr David-Murphine Anyomi, told the Daily Graphic that he had to use his initiative to contain the invasion of the worms and pests on his 50-acre maize farm.

The farmer said the worms had always destroyed crops in the area since last year, adding that vegetable farms had also been attacked by weevils.

He, therefore, appealed to the government to extend the ongoing nationwide spraying exercise to the region to ameliorate their suffering.

According to Mr Anyomi, he is also in the process of installing a processing plant which could process 36 tonnes of maize, rice, cassava, pepper among other crops per hour to help reduce post-harvest losses and also ensure good pricing for farm products.

Another farmer, Mr Forster Amoako, who has cultivated 60 acres of maize, said the invasion of the worms started three years ago and added that he had always sought assistance to spray the farm.

At Mr Ben Ahiabu’s farm, it was observed that his three-week old maize farm was already under attack from the army worms, with another 40-acre farm belonging to Mr Robert Gorni facing the same threat after one month of planting.

According to Mr Gorni, his 15-acre maize farm has all been destroyed by the army worms.

When contacted, the Ho West District Director of MOFA, Mr Enoch Dzadzra, confirmed the invasion of the army worms on some farms, particularly at Ashanti-Kpoeta, Akome, Hlefi and Abutia–Kpota.

He said field officers were on the move to educate farmers on how to prevent the worms from attacking other farms in the area.

Mr Dzadzra said his outfit was expecting to take delivery of chemicals to help control the spread of the worms.