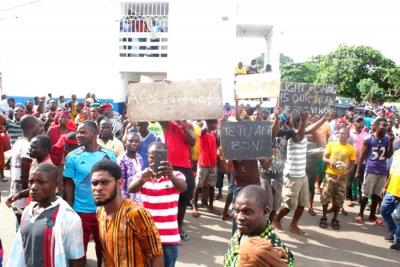 Some irate fishermen in the Greater Accra Region last Saturday besieged the Civil Service Training Centre at Cantonments in Accra to disrupt a scheduled meeting between their leadership and the Ministry of Fisheries over banned light fishing.

The incensed fishermen, some of whom were clad in red apparel, arrived at the centre about 11 a.m., even though the meeting was scheduled to commence at 2 p.m.
They later charged on some people they suspected to be members of the recently inaugurated Fisheries Watch Volunteers Group.

In the ensuing melee, some of the volunteers were heckled, while others fled.

The angry fishermen accused the volunteers of being behind the attacks and seizure of canoes and equipment of fishermen in some coastal communities in the region, including Ada.

While the disenchanted fishermen occasionally broke into singing and chanting of war songs, their female counterparts rained curses and insults on the Fisheries Minister, Ms Elizabeth Naa Afoley, and the leadership of the National Canoe Fishermen Council (NCFC) for conniving to deny them their livelihoods.

The chaos resulted in the cancellation of the meeting, which was to dialogue and find amicable solutions to the challenges posed by illegal fishing in the country.

Among the grievances of the aggrieved fishermen, displaced on placards, was: ‘Light Fishing is our work. We don’t have any other work’.

This is the second time this month that enraged fisherfolk have disrupted an official programme meant to fight illegal fishing. The first was at the launch of the Fisheries Watch Volunteers Group in Ada to help prevent the use of unauthorised fishing gear, such as monofilament nets, light, poisonous substances, explosives, among others.

However, the fisherfolk maintained that light fishing provided them with good catches at affordable cost.

They condemned the Minister of Fisheries for setting up a task force that was attacking fishermen for fishing with light, while Chinese pair trawlers were allowed to fish freely in the country’s territorial waters without any hindrance.

“At Akplabanya in Ada, they brought people from Prampram to destroy our canoes and nets and seized 13 of our canoes. They (volunteers) took us unawares and beat a lot of our people, injuring many.

“We are not taking this lightly. This is what we do to look after our families and pay fees. They can’t just take away our daily bread like that,” one of the angry fishermen, Mr Emmanuel Abayateye, told the Daily Graphic.

Shamo Abbey from Tema and Sammy Botwe from Teshie both explained that they were at the meeting to send a strong signal to the fisheries authorities that they would not allow the ministry to deny them their livelihood.

“If the minister wants to stop light fishing, she should find a way of sitting with us to find the way forward; she just can’t employ other fishermen from elsewhere to come and attack us. We are Ghanaians and won’t allow anyone to take away our livelihood from us,” Mr Abbey indicated.

Efforts to contact the Fisheries Minister were not successful. She, however, told a television network that the ministry had initially had some negotiations with the leadership of the fisherfolk but, unfortunately, they could not arrive at a concensus.

“We had to get their fellow fisherfolk to right the wrong. Some fishermen were arrested and those engaged in light fishing are not happy with what is happening,” she said.

Ms Afoley said it was the expectation of the ministry that it would achieve some concensus at the meeting.

The Greater Accra Regional Chairman of the NCFC, Nii Djamlo Dja VI, asserted that “Illegal fishing is worse than galamsey because at least at some point water is treated before it comes to our pipes, but fish goes straight into our cooking pots”.

He insisted that the Fisheries Volunteers Group was necessary to protect the future of the industry.